This past 4th of July, we made a trip to Berchtesgaden Germany.  Berchtesgaden is located in the German Alps in Bavaria.  In keeping with our efforts to experience as much as we possibly can while living in Europe, we decided to stay in a Jugendherberge, or a family hostel.  We had originally reserved a family room with private bath, however, our room was given away at the last minute to another traveling family.  Apparently, at a hostel, this is not uncommon to have your reservation given away.  We stayed in a room with 4 sets of bunk beds, a small sink in the corner, and a bathroom across the hall for the entire floor.  Despite this accomodation being outside of our comfort zone, we actually enjoyed ourselves quite a bit.  Also staying at the hostel was a high school German class from Wisconsin with their teachers.  I had a pleasant conversation with the teacher about the kids and their experience in German schools.

One evening we were standing outside the hostel, and the American students were quite rowdy in the basement where they were playing ping pong and other games.  Patrick hollered through the window, "Keep it down!  What's going on in there?!"  Our children are not used to anyone responding when they speak English.  Which is why, when an American school boy hollered back, "We're having a par-tay!" Patrick's jaw dropped and his eyes bugged out of his head.  He said, "I did not think anyone would answer!"  Teddy and Patrick had the opportunity to talk to these high school students about German and living here.  They felt so proud of themselves that they speak better German than kids almost twice their age.  After struggling for so many years, they finally got to feel the sense of accomplishment of knowing another language and not being the one who speaks in the worst in the room!

We took a bus up to Hitler's Eagles Nest.  In front of us on the bus were 4 men, with heads shaved, all wearing "edgy" black, white and red clothing, and speaking something other than German.  They all had piercings and tattoos as well.  Being married to a bald, tattooed man myself, I quickly reminded myself this could mean nothing!  After touring the Eagles Nest and coming back down the mountain, I did a little research.  Our traveling partners were most likely neo-nazis from Scandanavia. Apparently, the Eagles Nest gets quite a bit of this kind of traffic.  Needless to say, we had the full tour!

We also visited the Konigsee (King's lake) nestled deep in the Alps.  Bavarian royalty and local rulers of Salzburg and Berchtesgaden hunted here, Hitler boated on this lake, and Eva Braun even sunbathed on its shores. We took a boat to the other side to Saint Bartholomew Church, originally built in the 12th century.  The boater stops the boat half way to the other side and plays his trumpet.  He plays a line, pauses, and the mountains echo with his trumpet sound! 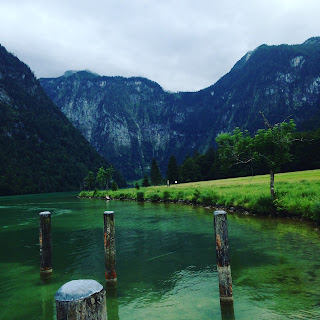 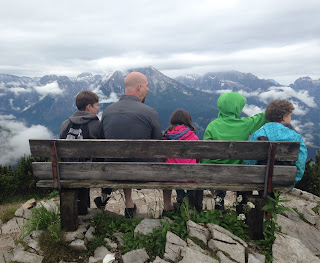 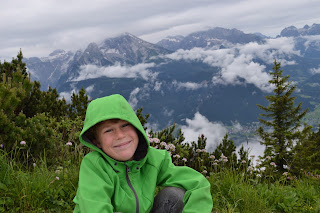 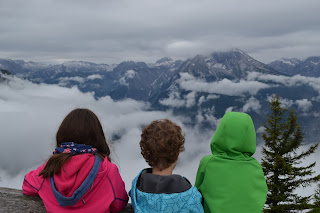 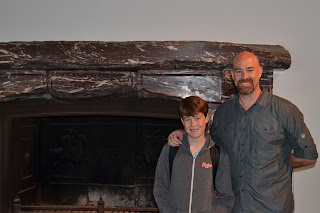 Inside the Eagle's Nest 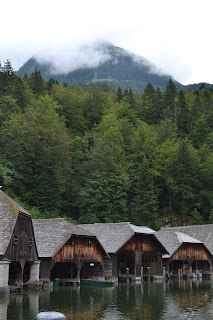 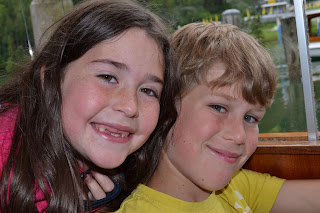 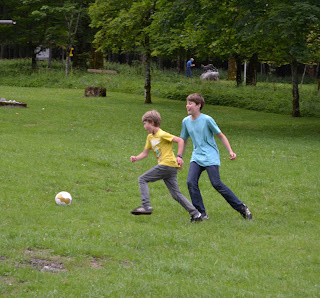 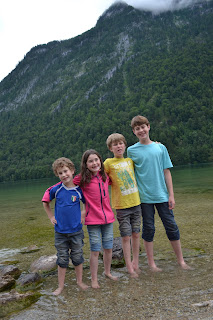 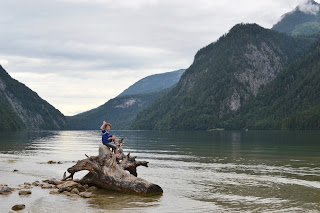 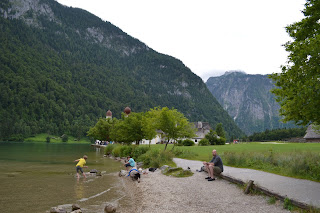 Skipping Stones in the Alps 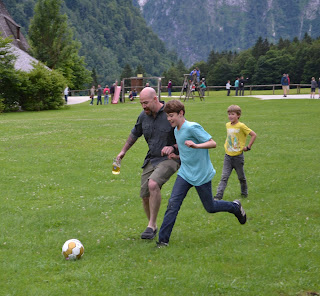 Little foosball with dad and his beer 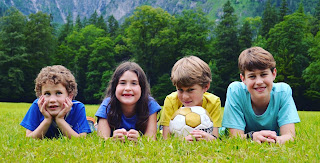 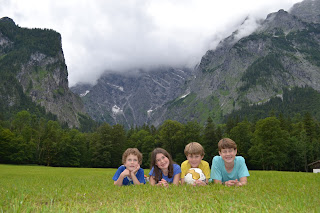